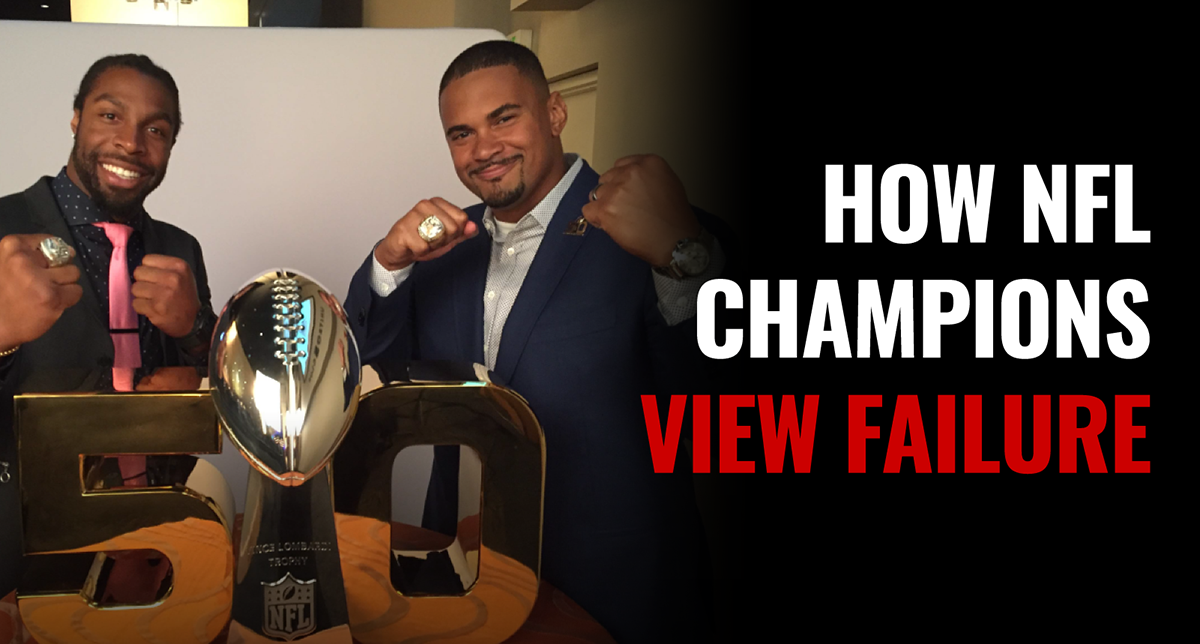 I had two different types of coaches throughout my NFL career. One coach would consistently discuss all the ways in which we could fail before going into a game. The other type would focus on how our strengths would be utilized to win a game, even saying winning scores at times.

Which one do you think had more success? Of course, it was the coach that coached to our strengths and spoke success to us so we could overcome any fear of failure. They were coaches who knew that failure exists in success.

Champions can teach us a lot about failure. Here is how they do it.

One of the things that I have come to realize while working in broadcasting after the NFL, is that many of us fear failure. For world champion athletes, however, whether you are weightlifting in the gym, moving to a different city or making new friends, fear of failure can never stop you from progressing.

One of my favorite drills in the NFL is the two-man sled.  It is a drill in which you work with the person you play next to in the line, hitting the sled with your shoulders from a three-point stance to drive it forward five yards.

I loved it because one of my coaches always said, “Get to the sled. It’s not going to push itself.” Your failure will also not push itself. Your success depends on your ability and willingness to push through your failure.

Failure is a Choice

What are the other choices? In times of doubt or other feelings I would often say out loud my options, ‘I can quit, I can give up the money,’ or ’I’m going to have a bad game because xyz.’ Then I would turn it around  ‘I can play until they stop payin’ me ha!….I’m going to have a great game in spite of my injury.’ Sometimes overcoming failure can be as simple as recognizing ALL your options. Sure you failed, what else happened? What else did you learn?

This can be applied beyond your personal performance to building community as well.

I was recently talking with somebody on their podcast, and they asked me how they could increase the diversity of their friends and their children’s friends.

My first piece of advice to him was, ‘Don’t be afraid to fail.’

If there is an incomplete pass on the field, have you ever seen the quarterback just pick up and leave the game. Hell no. He runs another play. Embarrassment, failure, a great play, whatever; they run another play. In the face of failure, run another play, no matter what the situation is.

You have no option to fail once the game starts.

Make Failure a Catalyst for Change

Failure can often be found in success stories as the catalyst for change. Think about it. It works for even the simplest things. The first time I ever had a tamale, I bit through the corn husk. I had failed to eat a tamale the right way. People all around me roared in laughter. But from that experience, I gained two lifelong friends because, in their laughter, they taught me how to eat a tamale. Teach me to eat and I’m yours forever ha!

We would not have been friends had I just walked away in embarrassment. If you think about your own growth areas in times when you bonded with people, they usually were built with success after failure.

In every single playoff game, there are going to be failures upon failures. In the NFL, failures are what you get used to. In every offensive drive that ends in a touchdown, one or two plays involve failure. Every time.

If I threw an incomplete pass, am I going to quit the game? As a wide receiver, if I drop a pass, should I just stop? The answer is no. There is a full game left to be played. In your life and with your goals, there will be failures. Failures are the way you know you are reaching for success.

Related: THE TWO WORDS THAT BETRAY YOUR SELF-CONFIDENCE

Broadcasting for Notre Dame this year I realized they had a great team, a team that would win ten games for their third straight season, when coach Brian Kelly said, “This team does not fear failure.”

Failure is not fatal, and every single champion understands that. Consider the experience of British Olympic gold medalist Mo Farah. He fell in the final 10000-meter race in the last Olympics, before working his way back to the front to win his gold medal.

Use Failure for Perspective

Every champion understands that failure provides perspective on where you need to grow. When you are always succeeding, you rarely recognize the barriers in your way. As soon as you fail, you realize the missing step or skill that you need to succeed. Champions appreciate failure.

My failures as a football player and as a parent helped me realize where I had room to grow and improve. Being a champion means always finding areas in which you can grow and develop.

Flip the Script on Failure

As an offensive player for ten years in the NFL, my teammates and I would overcome failures by looking at it from the other side. Did I give something away? Did I miss an opportunity?

Flip the script. How can I avoid failing? This question is critical to building out your success. What needs to happen if you do not want to fail?

In this way, you methodically plot out the points in which you need to have success. Failure is no longer about the end or the beginning, it is just part of the process.

Related: HOW MARCH MADNESS CAN HELP YOU HANDLE NERVES, MAKE TOUGH DECISIONS AND TRUST YOUR INSTINCTS

In my ten years in the NFL, I never heard, “That play was a failure.”

There are just negative and positive plays. This means players continue to move forward regardless of the outcome of a single play.

Champions view failure individually. It looks different for everyone.

Russell Wilson, the quarterback for the Seattle Seahawks, is the only quarterback to never have a losing season in his eight seasons of play, and he continues to improve. One of the things he credits that to is having a neutral mindset. He does not have good plays or bad plays, just the play that happened and the play that is coming next.

For Russell and other champions, there are no failures. There are just past attempts and current ones. Failure in the past has no bearing whatsoever on future success.

Each play is a singular incident of failure. We may just need to call a different play next time. Becoming a champion means you must learn how to deal with failure and understand that it is not fatal. Failure is the common thread in every success story on the field and off.

How do you fail?