How NFL Teams Hold Others Accountable 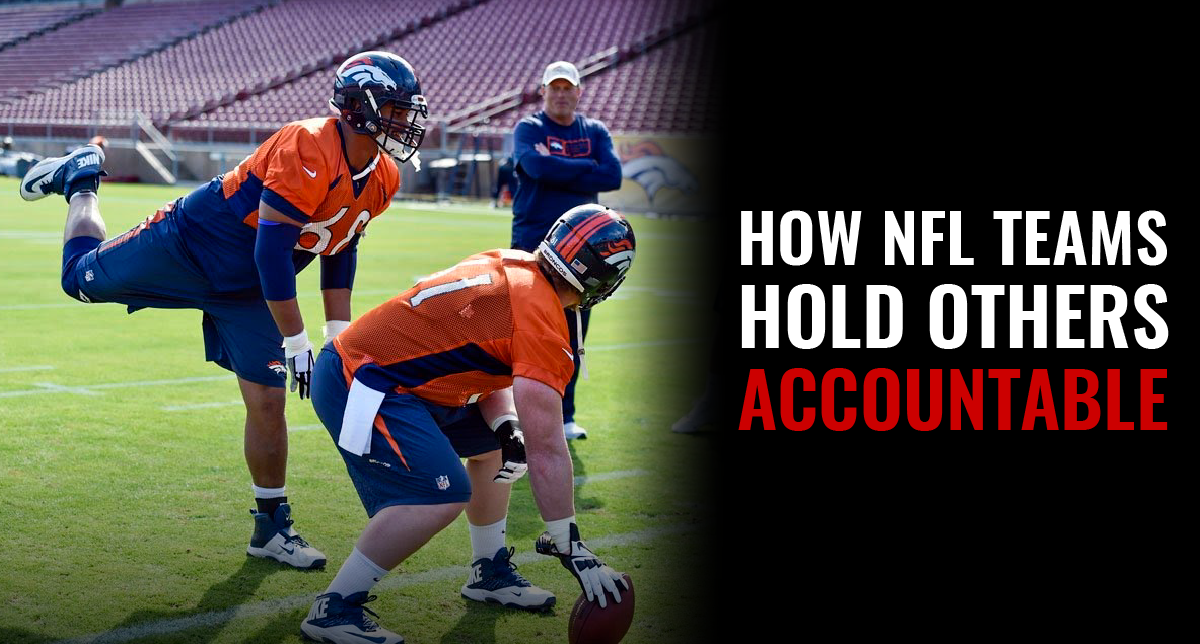 Posted at 11:10h in Communication & People Skills, NFL by Feel Me Flow

One of my most memorable introductions to how the NFL holds its players accountable came during training camp in my fourth year in the NFL. A player began screaming at the head coach about how he was doing things right, and the coach was wrong. Within twelve hours, that player was fired.

This is just one of the ways that NFL teams hold their people accountable.

During my speaking engagements at businesses and conferences, I am frequently asked how a company can hold its team accountable. It is not just businesses that struggle with this question. All too often, people make a mistake and refuse to take responsibility for it. As parents, we often fail to hold our kids accountable for all that we should.

There are a myriad of other ways the NFL teams hold others accountable. Hopefully, you take something from their approach for your organization, your kids, and your life.

Here are three tips for how you can hold those who you care about, and also depend on, accountable.

Production is the Priority

There is a saying in the NFL, “If you don’t work, you’re fired.”

We expect everyone to produce in the NFL. When a five-year veteran is up against a rookie player for the same position, the conversations in the room are not about seniority. They are about which player is more productive. Which one was in more productive runs? How many productive plays did this person have? Production always wins.

Related: How to Prevent Sandbagging When Measuring Success

One thing your team can never argue with is production. If you need to hold someone accountable in your life, point to the production, not the person. Steer away from feelings, but towards accountability.

It is something I practice with my kids.

I am holding my child accountable while at the same time focusing on productivity. Do not concentrate on anything else outside of that otherwise offense. This also protects you from triggering someone so they do not listen to you. Keep production the priority.

How Do You Review?

One of my favorite coaches always said, “Never minimize your role in a win or a loss.”

He often said this before film sessions after a game.

After every game in the NFL, you watch an hour and a half of film. During practice, you’ll spend twice as much time watching film as you spend on the field.

Even Navy Seals review training, missions, anything with after-action reports.

A review process stands as critical to holding others accountable. I was recently talking to an executive who owns a company. He records sales calls, not only the ones that his sales staff are on, but the ones that he makes. He reviews them with his team so they can ask questions and continue to learn the process and how to make successful sales calls.

I recently spoke to an auto refinance company. They are one of the most successful in the country. Why? Because they take the time to review calls monthly with even their most successful sellers.

What is your review process? When you need to hold yourself and others accountable, how do you review that performance? What are the metrics?

What opportunity do you provide for people to step outside of the situation, see their actions, and determine whether or not they were productive? Create opportunities for review to hold yourself and others accountable.

When you review, you provide an opportunity for someone to learn from a mistake and grow from it.  However, you also offer a chance for other team members to learn from mistakes and not make the same mistake again.

There exists another common saying in the NFL, “We can’t keep you if you’re making the same mistake.”

If you review something with someone, you discuss the mistake, and they repeat it, it now becomes a point of accountability on them.

It begs the question, “Do you not care, or was I not thorough in covering how we want this to be productive?”

It puts the onus on individuals to learn from the review moments that you create.

Never fail to underestimate the power of removing somebody who is a negative presence or is unproductive from your workforce.

Everyone gets put on notice: the player that screamed at the coach and was fired 12 hours later and everyone else. No player yelled at that coach the rest of the time he was at that team because they saw firsthand what happened when you scream and challenge a coach in public.

If you are going to hold others accountable, it starts with firing fast. There is nothing to be gained by waiting. Why put up with someone who is not a part of the team, does not believe in the mission, or is giving excuses rather than accountability?

Everyone else on the team is watching that behavior and viewing it as acceptable.

In the NFL, it does not matter how much you get paid. If you fail to produce, and you do not improve from the review, then you will be fired fast.

Eventually, with productivity as your measurement and after review, you will have built yourself into a place where you can fire fast. The person who loses the job understands why and everyone else who does that job realizes what they must do to stay employed.

Outside of football, I have seen too often that people do not want to hurt others’ feelings or they mistakenly believe the company cannot succeed without this person. If that person was successful in their position, you can find another. You prove it in the NFL every year, and you can prove it in your life by firing fast.

These are the ways that NFL teams hold others accountable and you can use them to keep yourself and others in your life accountable as well.

This website uses cookies to improve your experience while you navigate through the website. Out of these, the cookies that are categorized as necessary are stored on your browser as they are essential for the working of basic functionalities of the website. We also use third-party cookies that help us analyze and understand how you use this website. These cookies will be stored in your browser only with your consent. You also have the option to opt-out of these cookies. But opting out of some of these cookies may affect your browsing experience.
Necessary Always Enabled

Performance cookies are used to understand and analyze the key performance indexes of the website which helps in delivering a better user experience for the visitors.

Analytical cookies are used to understand how visitors interact with the website. These cookies help provide information on metrics the number of visitors, bounce rate, traffic source, etc.

Advertisement cookies are used to provide visitors with relevant ads and marketing campaigns. These cookies track visitors across websites and collect information to provide customized ads.

Other uncategorized cookies are those that are being analyzed and have not been classified into a category as yet.