So, You Have Reached Your Goal. Now What? 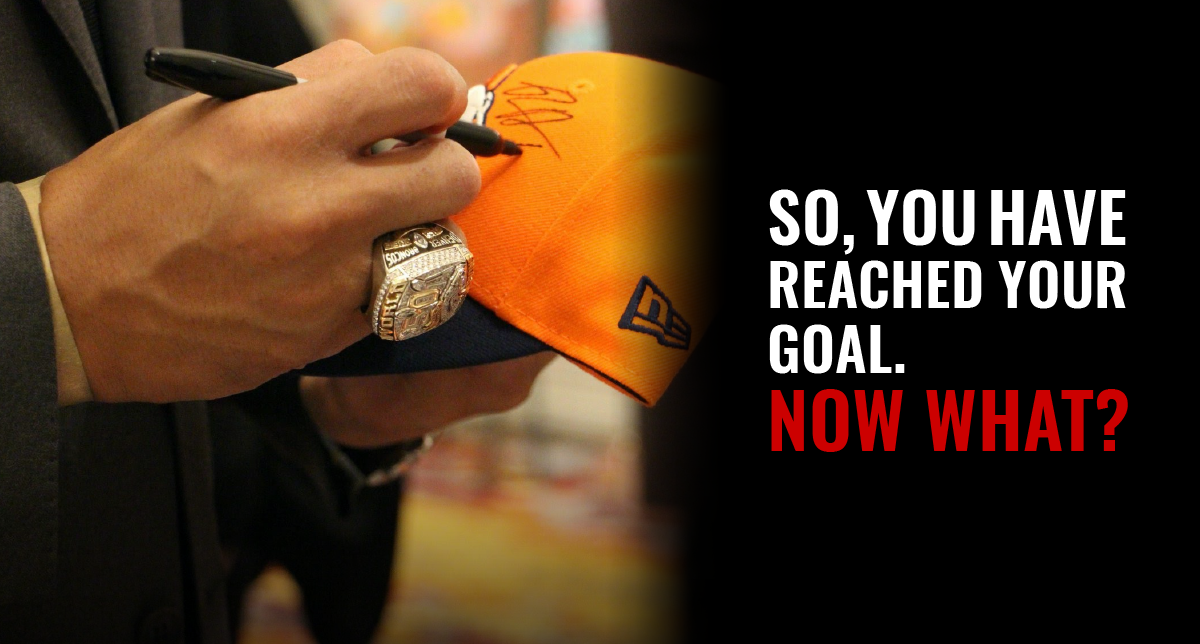 03 Mar So, You Have Reached Your Goal. Now What?

Posted at 11:43h in Uncategorized by Feel Me Flow

Two weeks after winning Super Bowl 50, I knew I had to get off the couch.  But I literally had no reason to move. I had nothing to prove, no one to impress, and that was the problem. I was woefully unprepared for achieving my goal.  In talking to Olympic champions and business leaders who got their buyout, I have realized how many of us, once we reach our goal, have no idea what to do.

So, two weeks after Superbowl 50, I decided to take a risk. The next day I found myself at 8:00 in the morning in a Series Six licensing class learning about financial vehicles.

Was I going to use it? I had no idea. Did I want to do it? Absolutely not.

After you reach your goal, it can be hard to know what to do.  Here are common themes that help figure out the next step.

What can you do once you have achieved everything you set out to do? The first thing you have to do is move. I sat on the couch the night before I had to go to my Series Six class, and I thought, “I’m not going. I do not need to go. I do not want to go.”

Then I looked down after I stood up from the couch, and I saw that I created a crevice in the couch cushion that I had been lounging in for weeks. At that moment, I realized that I could not make this crease any deeper. I cannot move to another side of the couch to make another one. I have got to step outside of this house.

I did not care what direction it took me, but I do know that knowledge never goes wasted. I like finance. I like money. I want to learn more about money.

So, I went to the Series Six class the next day. Before the class even started, three people had already recognized me from the Super Bowl 50 Broncos team.  Each one had the same question, “What are you doing here?”

I gave each of them the same answer. “I have no idea.”

The look of shock and dismay on their face was comical, but I knew I was in the right place.

After you achieve your goal, do anything. But definitely move and keep moving.

It will be fantastic when you accomplish your goals. It is incredible when you sell your company. It is impressive when you get the job you want, the salary you want, the vacation that you have always wanted to take.

Do Something Shockingly Different

I recently talked to a sales consultant who, after achieving his goals and his aspirations in the consulting world, said to me, “Ryan, I went to China to learn Kung Fu for 30 days.”

“Exactly,” he responded, “No one expected me to do it. Even I do not know why I did it, but I had to do something.”

There is no better time to try something new than when you are already successful. You can do no wrong. You can feel no pain in failure because you have already achieved your success. So do something shockingly different.

My own shockingly different plan is to start to learn Mandarin by the end of 2020.

Do something shockingly different.

One of my former teammates is opening a ‘Christian Brothers Automotive’ auto shop. A millionaire I know started a podcast after selling his business. An Entrepreneur I know started a workout facility for moms equipped with daycare. Another successful person I know wrote a book. Each did it by creating a new plan.

The last thing to do after you have achieved your goal is to build a new plan. What does it look like? Even if it’s a farfetched plan, put it out there. Include specific goals.

One of the things I said I was going to do after the Super Bowl was to get into broadcasting. I had never done it before, but I made a plan.

So I built a plan to become one of the best speakers in the entire nation, and I am continuing to work that plan.

When you have reached your goal, move. Then do something shockingly different and build a new plan.

You can do it. Again.