What Dr. Martin Luther King Taught Me About Financial Literacy 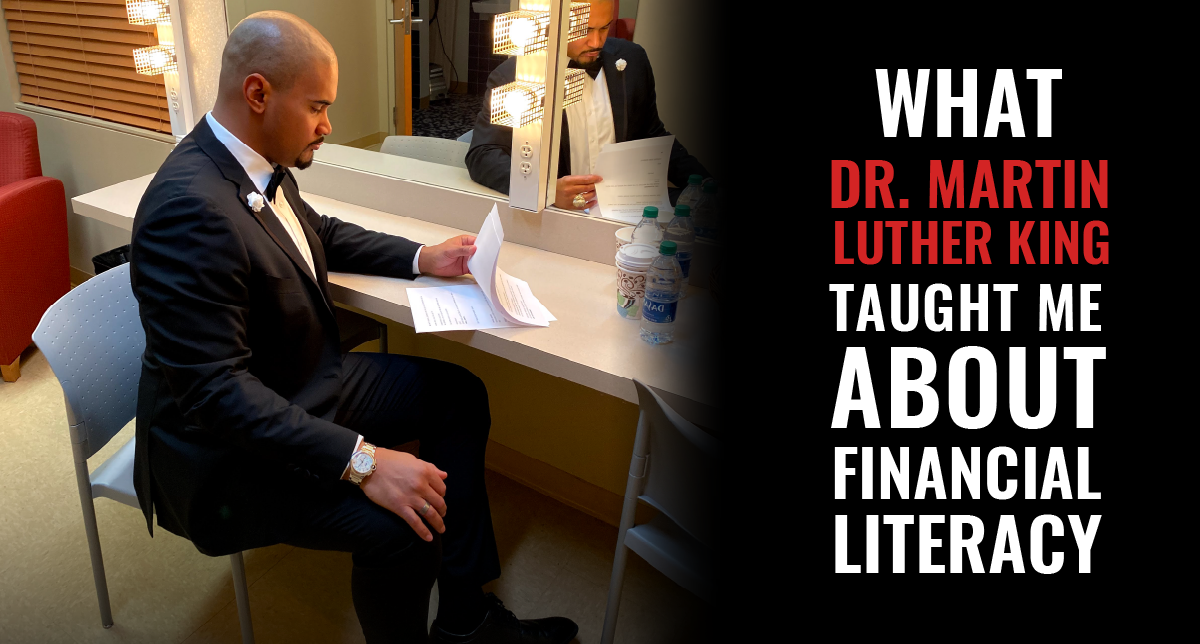 Posted at 09:04h in Financial Literacy by Feel Me Flow

Let us go beyond peace as Dr. Martin Luther King wanted us to. Let’s talk about money.

Standing on the steps of the Lincoln Memorial, Dr. King provided a vision of peace, unity, and equality in his famous I Have a Dream speech. Many of us still carry his words with us everywhere we go.

Unfortunately, this is the only Dr. King speech that most of us know.

Fewer know of his constant quest to educate people about their finances. He used banking terms and references frequently in his talks, even in I Have a Dream.

“In a sense, we’ve come to our nation’s capital to cash a check. When the architects of our Republic wrote the magnificent words of the Constitution and the Declaration of Independence (Yeah), they were signing a promissory note to which every American was to fall heir.” ~Martin Luther King, I Have a Dream, Washington, DC

Why was financial literacy so crucial to Dr. King?

Why was he on a quest to educate about and illustrate money, which caused Dr. King to use financial terms while talking about peace?

What really made Dr. King so impactful was that he went beyond peace, beyond equality, and beyond justice. Dr. King knew that in order to build on our constitutional foundations, we needed to be financially literate and he spoke about this with great frequency and emphasis.

“We (African Americans) have an annual income of more than thirty billion dollars a year, which is more than all of the exports of the United States, and more than the national budget of Canada. Did you know that? That’s power right there, if we know how to pool it.” ~ Dr. Martin Luther King, The Drum Major Instinct, Memphis Tennessee

It was his focus on, and the illumination of, the power we have over personal economics that fostered immense change in our nation.

Change created by protests such as the Montgomery bus boycotts, which were successful not just because of unity, but because of their economic impact. The bus boycotts lasted 381 days and cost Alabama $3,000.00 each day.

Where Dr. King made the most impact for myself and many others, was through his digestible and firm structures through which we can make everyday purchases. Purchases which can help propel us towards peace. These personal economic measurements still hold true today and some real gems can be found in my favorite speech, The Drum Major Instinct.

“You know, economists tell us that your automobile should not cost more than half of your annual income.” ~Dr. Martin Luther King, The Drum Major Instinct, Memphis Tennessee

“Now the economists also say that your house should not cost—if you’re buying a house, it should not cost more than twice your income. That is based on the economy and how you would make ends meet.” ~Dr. Martin Luther King, The Drum Major Instinct, Memphis Tennessee

Were you given such precise and wise guidelines for expenditures?

Do our leaders today give us these metrics for economic stability?

It was from this speech that I began to understand the power of financial literacy.

RELATED: When is the Right Time to Invest?

No one really wants to be constantly trying to keep up with the Joneses.

Yet what frameworks do we use when we choose our car?

Each of us knows what we want in a house. But do we find a house that fits our income? Do we know the equation for that? Or do we purchase a house we can grow into, at a cost that is dependent on continued economic success?

I was incredibly confused when I began to make money in the NFL because the cost of houses and cars often tripled the income of even veteran NFL players! Hadn’t everyone else heard the words of Dr. King?

When I went to purchase my first car, I had affordability in my pocket not what the car dealer told me I deserved.

When I bought my first house it was Dr. King’s equation I used, not what others might think of my purchase.

In doing so, in becoming financially literate, I understood the effect it has on personal and community peace, equality, and justice.

Remember the power Dr. King wanted for you and your money.  Remember how often personal finances were used as leverage by those upon whose shoulders we stand. And remember the importance it plays in achieving our greatness.

Live Dr. King’s dream in your car, truck, and house. Live it well, and live it in a way that allows you to impact our collective dream and make it reality.

I’ll leave you with a few final thoughts from Dr. King himself.