Who Do You Work With? How You Can Change the World 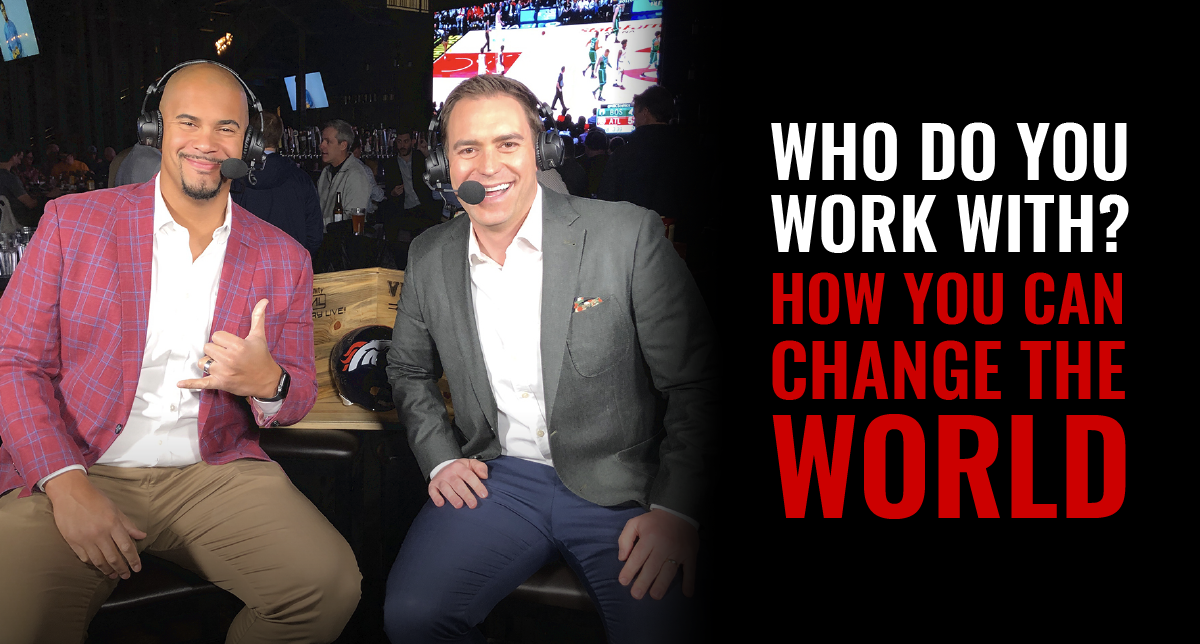 31 Mar Who Do You Work With? How You Can Change the World

Posted at 12:27h in Communication & People Skills by Feel Me Flow

As I opened the door to Altitude Sports Radio one morning, our mail lady stood up. She was in tears.  I was worried that I had maybe missed a phone call or something else, until she started speaking.

“Ryan,” she said, “I want you to be one of the first to know that I’ll be leaving the company. But I also want you to know how much you made my day, every day, by saying hi to me, asking me about my husband, and even bringing me gifts on the holidays. It meant the world to me and it kept me in this job longer than you know.”

It stopped me in my tracks. Try having a bad day after something like this.

Who do you work with? If you don’t know, you need to find out and here is why.

Who Had an Impact on You?

I’ll never forget my first ever football practice with pads on. I had no idea what I was doing. I was just a fourteen-year-old kid listening as much as I could. At the end of practice, as I took off my helmet and put my glasses back on, the head coach turned to me and said, “Ryan, if you keep this up, you can be something special.”

I had no idea he even knew my name. However, that encouragement gave me the confidence to accomplish everything I wanted in high school and eventually go to Notre Dame and beyond.

Who noticed you? What kind of impact did they have on you, and why have you failed to have that impact on others around you?

How Can You Impact Someone Else?

Who is someone that you see everyday, but you have no idea who they are or you do not have anything to say about them and their life? How irresponsible of us!

There are people all around us who impact our day.  How about a simple hello or asking them a question?

How are you handling the changes due to COVID-19? How was your weekend? Are you looking forward to anything? Did you do anything special for the holidays?

Having an impact on those around us is an opportunity we have every day. You can completely change someone’s day just with a simple acknowledgement. You will find these people in the mailroom and at the security desk, keeping you safe. If you’re a traveler, you might see the same TSA or booking agent.

What question can you ask them? Can you give them a high five? Can you invite them to lunch sometime with your office mates, your classmates, or your teammates?

Who is someone you see every day and know nothing about? Start there.

A Simple Thank You

You never know how reaching out can change your own life.

The year we won Super Bowl 50, we played the Cincinnati Bengals on Monday night. It was a tight game until the fourth quarter. During that fourth quarter, the video producer for the Broncos played a video that he had made. The video combined clips of Matthew McConaughey pounding on his chest in the Wolf of Wall Street with images of fans doing the same thing.

The place went absolutely nuts. Beers were flying. Peanuts were flying. Players were screaming at each other and pounding their chests. At that moment, we became a team that would never lose a game and we rolled that to Super Bowl 50.

After that game, I tweeted out, “To whoever was in charge of the video board, that video was awesome!”  I got to meet that person later and it turned out that they were heading to Notre Dame to run the new jumbotron at Notre Dame stadium the first year it was ever to be put in.

This person said, “Hey Ryan, why don’t you swing by sometime? We will see if there’s any digital work you can do in broadcasting.”

“Sure thing. No problem,” I thought.  Now here I am, the radio broadcast announcer, the color analyst for Notre Dame radio. I’m so glad I reached out to someone when I had no idea who they were and thanked them.

Can you thank somebody that had an impact on you? Can you surprise someone with a simple thank you?

You never know how acknowledging somebody will impact their lives and how interacting with someone new can change your own.

I regularly pass people in the hallways at the broadcasting office and usually try to say hi to them.

One day I randomly asked this person, “Hey, so what is on the eighth floor, anyway?”

It turns out that this person worked with Donor Alliance, an organization that helps families with loved ones who need an organ, eye, and tissue donation register and go through the process.

Wow. My dad had kidney disease and required a kidney transplant. I asked if this person could put me in touch with some hospitals here who have a kidney program.

“Absolutely,” she responded.  And because I had taken the time to speak to a random person that I frequently encountered in my sprawling office complex, they helped my father and my family learn about our resources.  Later, that same organization asked me to partner with them to increase awareness and education about opportunities for individuals to become an organ, eye, and tissue donor.

Random conversations have had a significant impact on the health of my father and the happiness of my family. They’ve also enhanced the exposure of my career to people I would never have met otherwise. I am so glad I took the time to speak to these people when I had no idea who they were or what they did.